‘We are all part of a community’

My sister who is a nurse had a patient who was a retired Mountie. She told him all about me and he was the one who recommended I think about policing as a career. But being a little brother, I didn’t want to hear anything coming from my big sister, I was just being stubborn, Constable Kenneth Mugisha now laughs. It was another year before I actually applied.

Cst. Mugisha did not always consider becoming a police officer. Life took him down many different paths. I wanted to be a doctor like my dad, but I realized it’s a lot of studying. I always enjoyed being active more than being inside. For a long time, I didn’t think too much about what I was going to do. Because I respect the profession, I then wanted to be a teacher. I started my studies at Kwantlen towards teaching. The thing that deterred him though was that he felt teachers did not get the respect they deserved for such an important job of educating our youth. 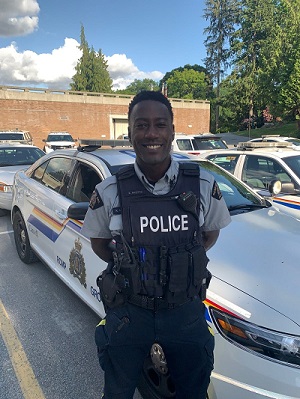 Cst. Mugisha had a very typical upbringing in Surrey, BC. He was the youngest of four children, with three older sisters. Though his parents had immigrated to Canada from Uganda in the 1970s, the Mugisha’s were the only Black family in the 80s in the Panorama Ridge area of Surrey. His parents instilled traditional values in their children and gave them a home full of love and support but Cst. Mugisha’s father’s parenting tactics had a profound and lasting impact on his son. My dad always advocated hard work. He always said ‘you don’t stop when you’re tired, you stop when the job is done.’ You don’t get to back out of a task.

According to Cst. Mugisha his dad always had a rationale ready so his kids could not back out of the task at hand. My Dad would say we live in a community if I didn’t want to do my chores. We are a community, we help each other. Cst. Mugisha still carries the notion of community with him today on the job.

Initially Cst. Mugisha went to a Vancouver Police Department information session at the Justice Institute but he didn’t want to limit himself to one agency, so he went and watched the RCMP’s career presentation as well. He saw both presentations multiple times, watched all their recruiting videos, and spoke at length to recruiters. He liked what policing entailed in regards to core values; a job that exemplified honesty, integrity, compassion, and respect.

In the meantime, Cst. Mugisha spent his time doing volunteer work. For two years he spent multiple days a week volunteering with the Surrey Foodbank handing out food to members of the community and coming to understand the people who needed it. He called the experience an eye opener that taught him about the people who live in his community.

Cst. Mugisha also volunteered with the Community Police Office in Kitsilano. He spoke to many different people and directed them to a multitude of services. While there he saw how policing works and how people rely on the police for everything related to Victims Services, Fraud, Property Crime, in addition to, Foot patrols, Block Watch, cell phone checks, and traffic enforcement.

But it was a ride along with a Surrey RCMP officer that really made Cst. Mugisha know that he was doing the right thing in choosing policing as a career. He knew the officer as a friend but was surprised to see him in cop mode.

He treated everyone with respect. But he also knew how to be an authority figure. We went to a call where there was a suicidal male, the constable was able to ease the tension simply in the way he spoke to the individual. He got EHS ready, took good notes, he really knew how to do his job and I just wanted to emulated this.

Cst. Mugisha went to Depot in January of 2019 which he called a mostly positive experience in his life. One thing they don’t tell you is how lonely the experience can be. That loneliness meant he and the three other Black recruits bonded together. He adds that at times it was hard to find inspiration when not seeing others from the same community in the process of becoming a RCMP officer. 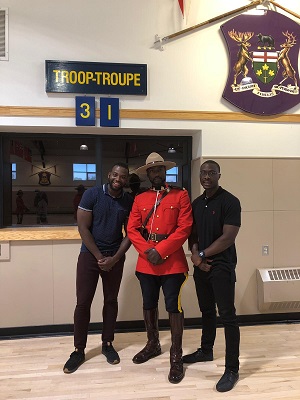 According to Cst. Mugisha, representation is important. I can’t be the answer for every Black person. But I know that just being in the uniform is important and kids need to see it. There is a disconnect between the African community and police. To fix it, it’s tough, but it’s important to show people and to especially show young people what we can achieve. What we see of the US isn’t the Canadian experience. We need to get more African Canadians in the uniform to break stereotypes and get more kids interested in policing as a career.

I think being Black in Canada is amazing, it’s important. Canada is a multicultural society, he says, adding in some countries discrimination, racism, and prejudice is in your face.

That is not to say it is not present in Canada. In Canada it is indirect discrimination, explains Cst. Mugisha. I show up with a white officer, they will respond to the white officer even though I am the lead investigator. They don’t directly say they won’t deal with you, they’ll just ignore you. We bring so much to the table, Black doctors, teachers, scientists, we have Black people in every field of expertise; we just need it acknowledged more.

I was called to a robbery at a store. There was an older Black gentleman there who was so excited to see a Black officer. It was only in 1969 that the first Black Mountie entered the ranks and changed policing. The road has never been easy for police officers and recruits who have faced discrimination on their journey. According to Cst. Mugisha, there is still not a lot of Black recruits who make it through the process for a multitude of reasons but maybe they don’t know they even have that avenue.

Cst. Mugisha has spent his first year and half as Mountie in Burnaby as a frontline officer, an experience which has exposed to him to everything. Frontline officers are often the first on the scene, whether it is a homicide, a traffic incident, a domestic situation, or a break and enter. 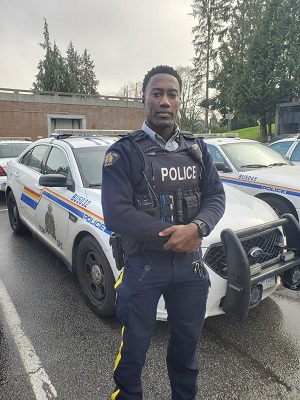 He says his experience working as a police officer has been very positive, but the part he speaks excitedly about is the comradery and community he feels at the detachment. Being so new to the force there is still so much for me to learn. But whenever I have asked for help someone has always been ready to provide support. There’s been a real sense of community within policing and we are all working for a common goal.

When asked about the Black Lives Matter movement, Cst. Mugisha is now able to view the movement with a unique lens. My experience now that I am a police officer has changed my view. Before I was a member it was easy as a member of the public to have high expectations of police officers, assuming we are all tactical expert. We’re actually just normal Canadians who want to serve and we’re put into situations where we have to make split second decisions that are not only going to affect us for the rest of our lives but affect you for the rest of your life.

According to Cst. Mugisha, police officers have hundreds and hundreds of interactions with public. I never knew this until those expectations were placed on me. And now as a police officer, when I see certain things and people are quick to yell racism or police brutality I really take a second look at it because what is shown on media is not the full scope of an incident. The last thing we ever want to do is ‘shake’ someone up because of the colour of their skin. We really do want to provide them service or direct them to appropriate resources to get help.

I don’t want to look at it as a political subject because our lives do matter. I don’t want to diminish Black Lives Matter, but our lives go beyond this moment of notoriety. I’m going to be Black for the rest of my life. My daughter will be Black for the rest of her life. My wife, my sisters. The movement is there because people feel disenfranchised and not heard, and that should speak to all Canadians, all of our lives matter but the Black community continues to feel disenfranchised. Representation is so important.

I want all people to say we can help. Change can happen a lot faster if we work towards giving Black people the chance to make a difference. Someone gave me the chance but rest was up to me. It’s hard to get in the game without opportunities. I may not be a role model, but when a kid looks at me and sees an officer that looks at them, I hope it inspires them to believe they can do this too. We shouldn’t be limited in opportunities available to us because of our skin colour.

All that he has been able to accomplish and do is not lost on Cst. Mugisha. My experiences are unique to me. Everyone’s pain runs deep, but some run deeper. I have been called many derogatory terms, but others have had it much worse. I’m lucky for all that I am and have.

Through his experiences he can now comprehend what his father always said: We are a community, we have to help each other out. We may come from different walks of life, but we must respect each other. If I can find a way to connect to the people who call me for help, show them respect when they are vulnerable, then I know I am doing my job.

The RCMP is looking for individuals with unique background that bring these experiences to their job. If you are interested in a career with the RCMP please visit our Recruiting page for more information and how to apply: http://www.rcmp-grc.gc.ca/en/police-officer-careers.