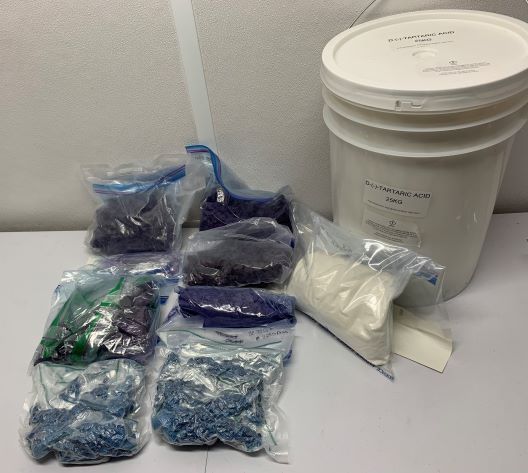 On Tuesday, February 23rd, 2021, the Chilliwack RCMP together with members of the Abbotsford Police Department, conducted a traffic stop of a suspicious vehicle in the area of No. 3 Rd near the Chilliwack and Abbotsford municipal border.

The stop resulted in the arrest of two Lower Mainland men, aged 23 and aged 27. A Search Warrant pursuant to the Controlled Drug and Substances Act was subsequently executed on the vehicle which resulted in the seizure of more than four kilograms of suspected fentanyl, an additional 50 kilograms of suspected fentanyl processing chemicals as well as multiple cell phones and a significant amount of cash. The vehicle was also seized by police.

The RCMP will be forwarding a report to the Public Prosecution Service of Canada (PPSC) for their assessment of CDSA charges against the two men.

Drug trafficking is a concern to all communities. This seizure of suspected fentanyl is significant, not only in the quantity of drugs and chemicals seized, but also in the fact that police from neighbouring jurisdictions worked together to combat illegal drug activity and take illicit drugs off the streets, says Sgt. Krista Vrolyk, Media Spokesperson for the Chilliwack RCMP.