Three charged with Break and Enter in Coquitlam 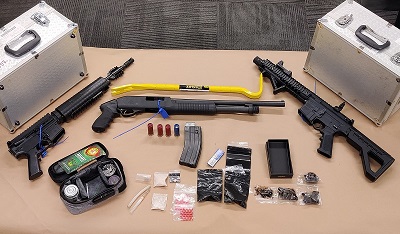 Coquitlam RCMP seized a shotgun, ammunition, and two imitation firearms during the execution of a search warrant that came from a break and enter investigation.

Police received multiple calls from neighbours in the 3400-block of Gislason Avenue on March 15, 2021, stating three males were breaking into a garage. Coquitlam RCMP’s Property Crime Team took conduct of the file and through their investigation and the execution of a search warrant identified the three males involved in the Break and Enter. Johnathan Haller, Kyle McGinnis and Sean McKinney have all been charged with the offence of: Break and Enter a dwelling with intent or commit, Section 348(1)(d) CC.

The evidence seized during the search included:

Coquitlam RCMP would like to thank the community for looking out for your neighbours, says Constable Deanna Law, spokesperson for the Coquitlam RCMP. It was the timely calls from the community that permitted the quick action from our investigators and resulted in the arrest of three suspects.

If you see anything suspicious in your neighbourhood, please call the Coquitlam non-emergency line at 604-945-1550. If you wish to remain anonymous and possibly collect a reward, call Crime Stoppers at 1-800-222-8477 or go to their website at www.solvecrime.ca