Since March 2020, Richmond RCMP Organized Crime Unit had been investigating the group responsible for the alleged laboratories.

Over the last 8 months, Richmond RCMP Organized Crime Unit, along with the assistance of multiple Richmond RCMP investigative units have been called upon to spend countless hours to bring the project to this point, said Constable Kenneth Lau. As a result of their meticulous work, they uncovered three locations with suspected drug manufacturing labs, all within the city of Richmond.

The search warrants were executed with assistance from the Federal RCMP Clandestine Lab Enforcement and Response (CLEAR) team, with Richmond Fire-Rescue’s HAZMAT team, chemists from Health Canada, and paramedics with BC Emergency Health Services as other partnering agencies on hand to ensure the safe dismantling of the operations. The size of the discovered operations resulted in the properties being held for 5 days while the labs were being dismantled.

The Federal RCMP CLEAR team undergo specialized training and have access to special equipment that allows them to process material too dangerous for other police officers to handle.

These types of searches need to be carefully planned and coordinated due to the potentially hazardous items typically found at these locations to ensure public and police safety is not jeopardized, said Inspector Michael Cohee, Officer-In-Charge of Investigative Services. This group was a priority of the Richmond RCMP and the dismantling of these labs will result in a significant disruption of organized crime in the city of Richmond.

The searches at the three properties yielded significant amounts of illicit street drugs, pill presses, and firearms. Items seized include: 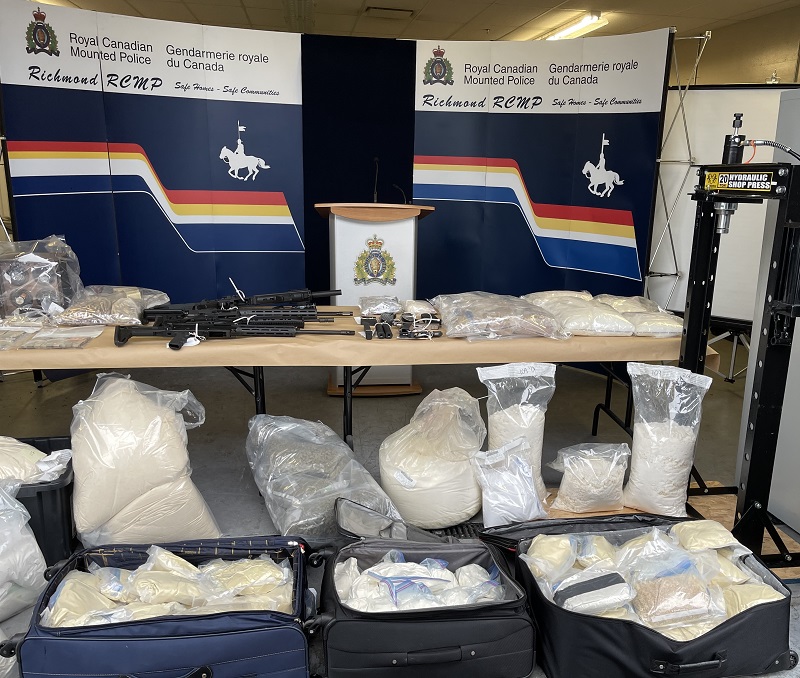 Investigators also recovered cash, and high-end items suspected to be proceeds of crime. This complex investigation remains ongoing and charges are pending.

Clandestine labs and the illegal manufacturing of illicit drugs pose a significant threat to public safety. The precursors and processes involved are volatile and explosive, making the property itself a fire hazard; and the chemicals and waste materials are toxic and can contaminate the environment, which can pose a serious risk to public health.

Richmond RCMP are committed to locating and dismantling any potential clandestine labs operating within our city. The public’s assistance is critical in helping identify a potential location for such operations. Some signs to watch for are:

Anyone with further information about this investigation or other criminal activity is asked to contact the Richmond RCMP at 604-278-1212, or if you wish to remain anonymous, Crime Stoppers at 1-800-222-8477 or at www.solvecrime.ca.