Flying the flag in honour of Pride Month

On June 1, 2022 Richmond RCMP raised the Pride Flag alongside the Canadian flag in honour of Pride Month. The Pride flag will be flown at both Richmond RCMP Main Detachment and Richmond RCMP City Centre Community Police Office throughout the month of June.

We are flying the Pride flag in support of the 2SLGBTQ+ community here in Richmond and around the world, says Chief Superintendent (C/Supt.) Dave Chauhan, Officer-in-Charge of Richmond RCMP, One of our goals in Richmond is to create strong connections with all members of our community. We want the 2SLGBTQ+ community to know we stand alongside them as they continue to advocate for equality, respect and inclusivity in Canada and around the world.

Richmond RCMP have long had strong connections with various, diverse groups within our community led by our Community Engagement Team. To further enhance and deepen these relationships, Richmond RCMP created a dedicated Diversity and Inclusion Unit in 2020.

We recognize that for a variety of reasons it can be harder for some communities to connect with police which is part of the reason we decided to create a dedicated Diversity and Inclusion Unit, says Inspector Michael Cohee, Officer-in-Charge of Operations Support. In addition to fostering and growing our connectedness to the community, the unit also works with various community members and groups to increase the education and awareness of our officers.

In further support of the 2SLGBTQ+ community, Richmond RCMP is part of Project Rainbow, a national awareness campaign demonstrating the acceptance, diversity and inclusiveness of the RCMP as a modern employer.

All Canadians have the right to live free from discrimination – free from hatred, says C/Supt. Chauhan, We want to ensure that everyone in our community who feels unsafe or unsupported knows they can speak to our officers, and do so knowing it is without judgement. 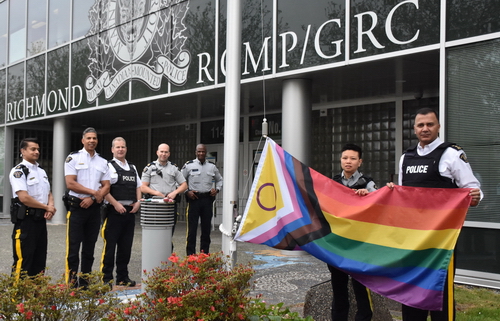