Your Richmond RCMP has been serving the community for over 60 years. We are the third largest detachment in Canada with a total of 227 Regular Members, supported by 2 Civilian Members, 85 full time City Municipal employees, serving an estimated population of 207,500. We’re located in the Community Safety Building at 11411 No.5 Road, south of Steveston Hwy.

Strategic Priorities for the City of Richmond

Approved by the City of Richmond in 2015

What the RCMP brings to the table

Who chooses the Chief RCMP Officer?

Mayor and staff are directly involved in the interview and selection process to determine who heads your Richmond RCMP. Chief Superintendent Will Ng is the current Officer in Charge.

Who’s in charge of what?

How long do RCMP officers stay?

61% of Richmond RCMP officers have been in Richmond for at least 5 years, some up to 20 years.

New recruits to Richmond stay a minimum of 5 years, and other officers who come to the detachment may transfer after 3 years. Richmond is a desirable career option for RCMP officers.

Decision-making Authority: Setting the priorities, goals and objectives of your Richmond RCMP

Richmond RCMP completes a detachment Annual Performance Plan every fiscal year, which allows the RCMP to tailor our services according to the priorities set by the City of Richmond. Priorities support:

Community consultation is a key component. This takes place in part through the City of Richmond’s Community Safety Committee. Richmond RCMP submits monthly reports to the Committee, available to the public in minutes online with the City of Richmond. Via these monthly meetings, the RCMP brings other issues to council’s attention, such as: 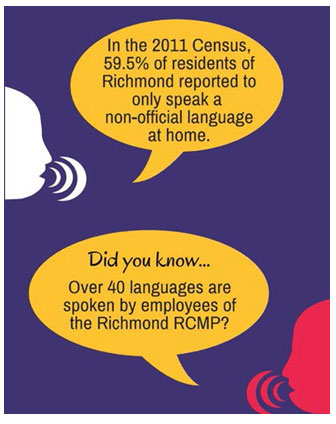